The other day I was talking about billionaires with a friend of mine. He said that Eugene Melnyk was a billionaire and I corrected him and remarked there was no way the Senators owner could be that rich because he wouldn’t even allow Bryan Murray spend to the salary cap. Long story short, we took our argument to the local search engine and sure enough, Melnyk is a billionaire (and surprisingly a resident of Barbados!).

Imagine this guy in a bathing suit on the beach! Yikes!

Being a Leafs fan I was completely unaffected by this (some may even say happier), but the hockey fan inside me was steaming hot. The owner of the #15 value ranked NHL franchise (via forbes.com) was too cheap to spend to the cap. The Sens will have a much tougher time being contenders with an internal budget. In fact it’s already costed them a few times.

Last off-season Melnyk and the Sens took long time captain Daniel Alfredsson for Granted and (reportedly) low balled him on a one year contract extension. Considering the year before he only made $1 million (his previous contract was front-loaded) and Ottawa was nowhere near the cap, the Sens should have asked Alfie his price and signed him a check. After all, he was the longest-serving European captain in NHL history, and their all-time scoring leader (by over 300 points!). It seemed like Alfredsson was offended by the Senators offer and in the end he decided to play for Detroit. It proved costly for Ottawa, as they missed the playoffs this year after a surprising second round appearance in the shortened season before. Ottawa seemed to be battling uphill all year, and I blame that partly on having a young team with a lack of veteran presence (not to mention a decline in goaltending, and an overly young defense corps).

I know it was far-fetched but I really would have liked to see more of the Hemsky-Spezza-Michalek line. I really liked what I saw from them in their limited time together last season. Of course that won’t be happening . Milan Michalek will likely be looking for something in the $4-5 million range and I believe the Sens will gladly let him go for that price. It also appears they will not sign Ales Hemsky (does that mean the Sens traded for a rental when nowhere near a playoff spot?). And as you all know captain Jason Spezza is on the trade block. This is all extremely disappointing for me, as I would’ve liked to see some more of that line. Who knows what could have been if the Senators pockets were a little deeper.

Ottawa has great fans but during the regular season the Canadian Tire Centre (By the way, pick a name!) is usually far from full. There’s a saying out there: “You have to spend money to make money.”  With a payroll of 48.1 million (courtesy of capgeek.com) that isn’t even close to the cap, it might be a good idea to bring in a superstar or two to attract more fans. 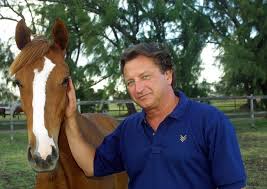 Melnyk should stick to the horses!

Hopefully, for Sens fans Bryan Murray can deal Spezza for a good price. The ask is reportedly a player, a prospect and a first round pick. I don’t expect them to get that much for him especially with Ryan Kesler and (maybe) Joe Thorton being shopped around. Either way, the Sens would really benefit without an internal budget, as would any and every team. C’mon Melnyk!

4 thoughts on “Melnyk the Man”