On Thursday Major League Baseball handed down a 10 game suspension to Yankees pitcher Michael Pineda for “possessing a foreign substance, Pineda had a big blob of pine tar on his neck and it was a violation of baseball rule 8.02, which states, “The pitcher shall not apply a foreign substance of any kind to the ball.
This was the second time Pineda has used pine tar on the mound. He was seen with pine tar on the wrist of his pitching hand in a game against the Red Sox on April 10. 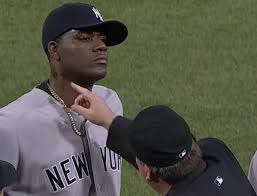 Why did Pineda use pine tar?

First I think Pineda deserved a 10 game suspension, what he did was very dumb. Who would ever think of putting pine tar on their neck in a major league stadium, with cameras every where. I mean I knew every one would be watching him as he got out of using pine tar the other game against the Red Sox.
More over, Pineda used the pine tar because he couldn’t grip the baseball in the cold weather. Do you know that feeling when you are in the cold and your hands are dry and numb. It is very difficult to grip a baseball when that happens. In that inning Pineda could not control his pitches, all though pine tar doesn’t allow the pitcher the make the ball move in weird ways, just ordinary ways.