Mark Buehrle has been the Blue jays most valuable pitcher this season.
Buehrle and Bluejays catcher Navarro have had great chemistry, as he prefers when the catcher calls his pitches.
In tonight’s Blue jays loss to the Boston Red sox Buehrle surrendered 6 earned runs over 5 innings allowing 12 hits, walking 3 and striking out none.

After the game Blue Jays manager John Gibbons said “That’s baseball, you’re not going to be perfect every time out there. “He’ll bounce back. He was just off tonight, it’s that simple, like anybody else can be.”
Buehrle entered the game 4-0 and had allowed only two earned runs in 28 innings. He was looking to become the first pitcher in franchise history to win his first five starts.
The 4 time all star will look to bounce back in his next scheduled start on May 1st, against the Kansas City royals at Kauffman stadium. 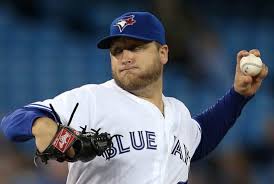